One of the first times it happened to me, it literally took my breath away. I was awakened by the sweet sound of birds chirping. As I lay there comfortable in my bed I kissed the morning, “Hello,” and swam in a pillow of warm thoughts about what the day might bring. Sunlight pouring in our bedroom window beckoned me to embrace the day. It was a Saturday. And it was going to be a beautiful Saturday, indeed. I contemplated what the Kirbys could do with this day, our Saturday. In my mind I starting making plans. I rolled over and my eyes caught my husband sleeping next to me. Perhaps he and the boys would enjoy fishing on a beautiful morning like this. Straightening the house was at the top of my to do list. Perhaps Chloe would want to be a little helper. We could get the house in order in a few hours and then have a girl day. What to do? We could go visit Momee and Popee. We could go to Queen's Nails for some pampering. We could see what CC was up to today. My thoughts returned to Eddie and the boys potential fishing outing. My mind conjured up an image of them out on the Ocean Springs pier casting their lines and enjoying some Dad time. There stood my beautiful boys: Eddie, lil Eddie, Jeremy, Mosie and Duke. All together, fishing, joking, enjoying each other's company. And in a flash of an instance it all flooded back.

An instantaneous wave of deep grief overcame me.
There would be no Jeremy on their fishing trip.

The mind is a powerful thing. Mine had just played a trick on me. For just a matter of a few minutes I had “forgotten” that Jeremy was no longer with us in an earthly manner of speaking. The gut-wrenching, intoxicating grief found in the moment of remembering enveloped me. The loss, pounding in my head, drove me out of my bed and into the kitchen for refuge. Coffee. Maybe coffee would help. I stood in the kitchen doubled over weeping so deeply, so overcome with anguish. My head was spinning, and I felt like I could vomit at any second. “Mama, what's wrong?” Little Eddie sat straight up. He had sought refuge on the coach. Couldn't sleep in his lonesome room. The room that he and Jeremy had shared since Eddie was 17 months old. The day Jeremy was born. Brothers, bunkmates for twelve years. Waves of guilt replace the pain as I wipe the tears off my face. How did I not realize he was sleeping on the coach? Why did I not go outside to scream and cry? I wouldn’t have wanted him to see me this way. I apologized to him, joined him on the couch, and began to tell him what had happened. He held me in a tight embrace and kept saying over and over, “It's ok, Mama. We are going to be ok. It's ok.” As I tried to pull  myself together and assure my son that I was "ok," Lil Eddie got teary eyed and said that that happens to him, too. It happens to all of us a lot. More than you could imagine.
We all got bikes for Christmas. Eddie put some nifty hooks into the ceiling of our garage to hang them from. After an afternoon of riding, we returned and Eddie began hanging the bikes up. I came back into the garage from checking the mail, admiring his work. As I stood there watching him place each bike on its hook I started counting bikes. It looked like one was missing. I kept counting them in my mind. “One, two, three, four, five, six....” After a few counts, and a few looks around the garage for the “missing” bike, I decided to get Eddie on the case.  Perhaps he knew where the “missing” bike was. “Babe, we seem to be missing one of the bikes. Where's the other bike?” He looked at me with the sweetest, gentlest eyes. He knew what had happened. His face communicated his heartache for me, well. I began recounting in my head, as he said, “We only have six bikes now.” In the flash of an instance. It all flooded back.
Countless times this happens. I have fixed seven dinner plates numerous times, and then couldn't figure out why there was an extra plate. There is an extra plate, because there is any empty chair at our dining room table. Looking for the boys' birth certificates to play ball. Counting, one, two, three...Where is the fourth one? There is no fourth ball player anymore. Counting one, two, three, four, five every where we go, as I had done rotely for years. Are we all ready to go? Are we all in the car? Are we all here? Are we all back in the car? Are we all back home? One, two, three, four...Wait....Where is number five? Who are we missing? We are "missing" Jeremy. There is no number five anymore. At least not in this side of heaven. In our fragile, broken Kirby world we are always “missing” a piece of us. Someone very dear to us. Precious. Irreplaceable. As Mosie, in true Mosieness, coined, “We are a puzzle of seven and one piece is missing.”
Email Post
Labels: death loss of child missing someone 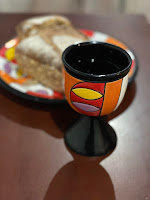 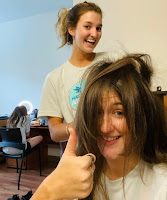 My Tribe. My People. My Mississippi.